This past week I had the opportunity to review Austin Meade’s brand new album Heartbreak Coming.  I was really excited to hear about his new album

after seeing him live at the River Road Ice House a few weeks ago where I had my first taste of his music.  If you haven’t heard Austin Meade, he has a great blend of Blues and Rock N Roll with a distinctive southern flair to it.  He puts on a great show as well as great studio music.  Heartbreak Coming is his second album, his first being Chief of the Sinners and I would have to say it would be a great introduction to his sound if you haven’t heard him before.  It definitely had my attention from the first song to the last with its story songs full of vivid lyrics and soulful singing.

Born with a Broken Heart
The album starts off with a song about uncertainty.  Life is hard and Austin sings about how his being overly self critical makes it even harder. He leaves everything behind following his dream despite his fears.  This doesn’t come without its consequences, his girlfriend loses faith in him and leaves him with an empty home when he finds his way back home.
It’s a very relatable song being about a struggle pretty much everyone goes through. What if things don’t work out?  What is the cost of following your dream?  The only way to find out is to try and find out the hard way and hope for the best. Born with a Broken Heart is full of vulnerability and emotion backed by some great electric guitar and Austin’s expressive vocals.  It sets the stage for the rest of the album establishing the overarching theme.
Feet on the Floor
In this track Austin speaks of regrets and the consequences of the choices he’s made. From giving up a steady, well-paying job to losing his friends and girlfriend after leaving town to tour the ripple effects of his journey weigh heavy on his mind. He’s free to do what he wants, but it is this same freedom that brings its own chains that bind him in the fetters of uncertainty and doubt.  The life he dreamed about isn’t all it turned out to be and he can’t return to where he was.  His life is now a balancing act between music and his personal life and he acknowledges his part in everything.  It is a mournful yet hopeful song with a steady beat with guitar riffs that amplify the emotion.
Courage to Talk
I reviewed this song in my newest episode and said this was addressing his ex girlfriend and him being afraid to warn her about the mistake she was making.  Upon further listening I realized I was wrong. This isn’t about his ex, it is about a friend coming back after a past argument and falling out. His friend got involved with a girl Austin knew wasn’t a good choice, but he was afraid to speak up at the time and his friend suffered the consequences.  This is an apology song despite his friend’s unwillingness to accept it.  It’s a song of frustration and regret backed by more some more of that great guitar and you can really hear the emotion in Austin’s voice.
Meant for More

Meant for More switches the tone up a bit with a laid back waltz about about the everyday rigors of touring.  Long late night drives through empty stretches of road and small downs, subsisting on sandwiches and quick meals from gas stations, and old flames and acquaintances now deciding that they’re 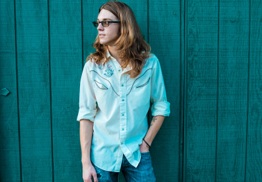 suddenly best friends again now that he’s achieved some form of fame.  Here Austin takes ownership of the choice he’s made; all of this and more is part of his life now and he has to deal with it.  Despite all that, though, it isn’t the end and he knows (or at least hopes) it will get better and there will be more than this in the future.  It has a very resigned feel to it with Austin’s vocal tones as well as a lonely tinge with the minimal guitar playing that swells hopefully during the chorus.  Subject matter and tone aside, this would be a fun song to dance to.

Written in Stone
The album ends with Written in Stone which addresses Austin’s ex girlfriend who has come up in Born with a Broken Heart and Feet on the Floor.  He sings about how hard it is to not think of her despite the time that’s passed.  He wasn’t ready for her sudden departure and despite his efforts of keeping her memory at bay by keeping busy, whenever he slows down the memories come flooding back, her name is permanently written in his mind.  It’s a very introspective and nostalgic song that like the last one is mostly during the verses, the instrumentation swelling with the chorus.  It’s got some suitably desolate and lonely sounding electric guitar, keyboard, as well as a bit of piano.  It’s a somber ending to a pretty varied album.

Heartbreak Coming is a short, satisfying story about Austin’s life as a musician that is very enjoyable.  Born with a Broken Heart sets the scene and provides a preview of what’s to come while at the same telling it’s own story.  Much like Aaron Einhouse in It Ain’t Pretty Austin doesn’t hold anything back in talking about the harsh life musicians lead, especially when starting out.

Each song is deeply personal and speaks from his own experience.  In my show I often speak about how many artists in the Texas Country and Red Dirt scenes have a tendency to show more vulnerability than those you see in the national mainstream and Austin Mead in Heartbreak Coming is a prime example of this.  He invites the listener to hear his stories and feel what he feels in everything from the lyrics, to the instrumentation, to his vocal delivery.  I think the song that shows this off the best is Feet on the Floor when he details the opportunities he passed up and the friends he lost along the way.  There are so many songs about the positive aspects of being a musician– the exciting times and rush of being on stage, the cheering of a packed house, so it is interesting to hear about the other side of it, the loneliness, uncertainty, and depression.  It really puts everything in perspective.  This is the first full album that I’ve been able to listen to of Austin’s and I have to say that I’m looking forward to hearing much more!  Heartbreak Coming came out on 6/3/16 and you can find it on the following sites: